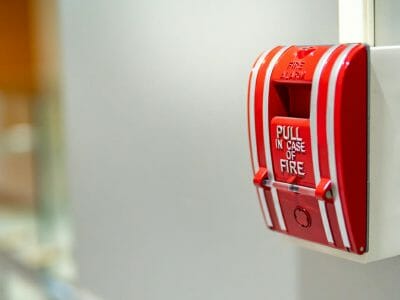 When activated by mistake, a fire alarm is often interpreted by condo residents as a noisy disruption. But in a real emergency, a fire alarm could save lives.

Security guards who protect residential properties must have a different attitude towards fire alarms. Each incident must be treated as if a fire were really present. This is no time to speculate about whether there really is a fire.

Security guards are expected to respond to emergency situations and minimize damage or disaster. Fire alarms are one of the most common emergency situations that guards will encounter in a high-rise condo building. Sometimes alarms go off due to a technical malfunction. Other times, a resident will set off an alarm by mistake. Regardless of why an alarm goes off, every one of your guards should be given proper training so that they can confidently respond to any situation.

Proper fire training for security guards is vital as they are the ones who will need to take charge in the event of an actual emergency. They should be trained regularly, and have up-to-date knowledge of fire safety measures for each condo building that they work in.

Fire safety training goes beyond dialing 9-1-1. Guards should know precisely where manual alarms, emergency exits, escape routes and extinguishers are located. They need to know what items they must retrieve if a fire alarm goes off, who to contact after the fire department has been called, where residents should be directed if they must evacuate the building, etc. During alarm response, guards need to keep residents safe, while maintaining contact with their supervisor, and other guards if applicable. The guard should follow protocol as best they can, but they should never do something that would jeopardize their own safety.

Prevention is the best plan, which is one reason why scheduled patrols are so important for guards to complete. While patrolling or maintaining their post, a guard has to watch for potential fire hazards.

Some basic things to watch for:

Security guards should also complete a visual inspection of fire extinguishers to make sure that they have not been recently damaged, and have not passed their expiry dates. Depending on whether the company uses security software, a supervisor may add notes or tasks to specific checkpoints so that guards don’t forget to check specific rooms or equipment for potential fire hazards. If any potential fire issues are discovered, guards should report them to their supervisor, and the building’s property manager, right away.

Condos may conduct scheduled fire alarms on a monthly or quarterly basis to ensure equipment, including the public address system, is functioning properly. While residents don’t always love them, these scheduled events give guards an opportunity to practice their response plan to fire alarms. By practicing during a planned alarm, guards should be better equipped to handle a real emergency.

There are four main reasons why a fire alarm will go off in the absence of smoke and fire:

False fire alarms must be handled as though they are real. Guards are expected to investigate and call the fire department, even if the alarm was pulled accidentally. Guards should never reset or silence a fire alarm unless the fire department has given the guard explicit permission to do so.

Condo communities want as few false alarms as possible because they can have some serious safety and financial impacts on the building. Residents living in a building that experiences frequent false alarms quickly become apathetic to the alarm. This can be problematic when a real fire occurs as they may doubt the seriousness of the alarm.

Furthermore, there may be significant costs to the association when a false alarm goes off, depending on local bylaws. For example, in Toronto, Canada, there is a service fee bylaw that allows the fire department to charge a “nuisance fire alarm” fee. A high-rise condominium will pay an average of $1,400 per dispatch for a false alarm. Of course, if smoke and/or fire are present, the condominium is not charged.

If there is a real fire in the building, guards need to act swiftly and implement the fire safety plan they were given. Guards should focus on locating the fire, getting help from the local fire department, and getting people to safety. Residents may panic during a fire and storm for the exits; guards can help ensure no one is hurt while trying to get out of the condo. While condo fires are scary, high-rise buildings are generally designed to be more fire-safe than the average single-family home. Floors and ceilings are constructed with fire-resistant materials, and are separated into fire compartments to slow the spread of the flames. Furthermore, every floor has access to at least two separate exit stairways, which provide a protected path to the exterior. Many condo buildings even have sprinkler systems to put water directly on the source of the fire. If everyone remains calm and alert, the chance of someone getting hurt is significantly reduced.

Guards with basic fire fighting training may be able to put out small fires before the fire department arrives, depending on where the fire is located. Simple firefighting efforts from a security guard may be the difference between minimal and costly damage to the building. But, battling a fire shouldn’t be the primary concern for a security guard unless they can reasonably put it out without risking their own life or someone else’s.

All alarms that security guards respond to should be treated as genuine emergencies. Fire alarms occur more frequently than other emergency situations, and every security guard should be prepared to respond to a fire alarm when it goes off.

Real fires don’t occur often, but the best way to prepare your security team for an actual emergency is to have them carry out the fire safety plan and proper protocol each time there is a scheduled or unscheduled alarm. When a false or real alarm does occur, guards should also fill out an incident report so that there is a physical record of the incident and the key details. These records can help security companies and condos make strategic, fact-based decisions that will help minimize future incidents.